The BioBizz hub is financially supported by:

Fertipaq is now officially the fourth participant in the BioBizz hub! On March 24, Elise van der Linde and Joost Paques signed the contract. Fertipaq is a start-up that sales bio-sulfur as a fertilizer for oilseed rape, corn, wheat, potatoes, onions cabbage, fruit, etc.

Sulfur as a nutrient is becoming increasingly important. As food production grows worldwide, the incidental input of sulfur is declining. With a sustainable fertilizer, Fertipaq wants to change this. The fertilizer Fertipaq uses is a suspended sulfur-liquid, which is biologically extracted from wastewater with the help of bacteria.

As a spin-off from Paques, with a biobased and circulair product and the need to scale-up and bring their product (more) to market, Fertipaq has a perfect match with the BioBizz hub. Fertipaq already has current sales in the Netherlands, Belgium, Germany, France, England and China. 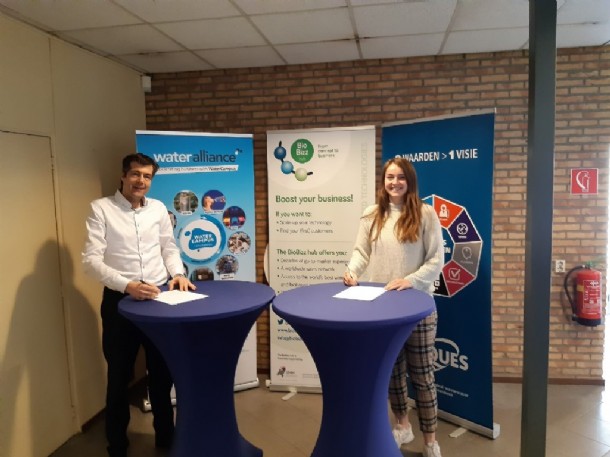 The BioBizz hub is financially supported by: